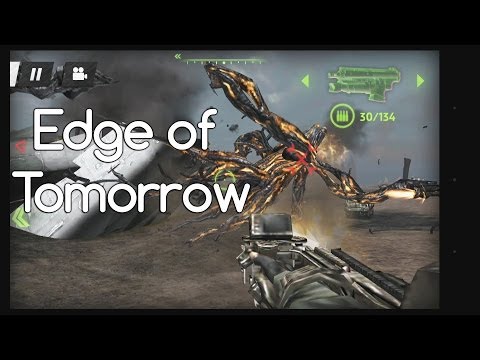 Hi everyone. This is Edge of Tomorrow, a free to play movie tie-in game which doesn’t actually suck as hard as you might think it would. Overall, it’s actually a pretty good game. It sort of has this endless runner vibe going on but in a first-person shooter kind of mechanic. Essentially you’re a dude presumably the lead dude in the movie who has an XO suit, that’s basically a mechanical suit that you strap yourself into, a little bit like the walker from Aliens.

Now the whole idea here seems to be a kind of D-day landing kind of thing. Aliens have either taken over or invaded or who knows what and you are a super-soldier along with a load of other super-soldiers and you’re going to have to defeat this alien menace. Now the graphics are actually really good for a free to play game that’s a movie tie-in, the animation and everything is pretty well done apart from on the aliens which just look a bit weird when they’re attacking you.

They sort of flail around all over the place. But what I really like about this game is the kind of interactive nature of the world. As you’re kind of moving forward, attacking and trying to, you know, stay out of the way of the alien menace the environment changes around you with things like helicopters crashing, jeeps exploding and all of these things could kill you. If you die you kind of go back a little way and you start again and the whole idea seems to be that every death means you learn something. Now I can’t quite work out how this game kind of fits in as to whether I’m actually growing stronger or faster or doing more damage each time I die but certainly the game does feel like it’s getting a bit easier each time you reset. Now in part that might be because you’re kind of learning the environment and where certain events are going to occur so you can kind of dodge round them or be a little bit more prepared for the alien attacks but overall the game works really well.

The shooting mechanic is not so much aim and fire as just aim and the auto firing will take over for you and make sure obviously if your reticle is on the alien that alien is going to get pumped full of lead. Now I love what they’ve kind of done here for eschewing the usual it’s a movie tie-in game so it’s going to be a really boring quick cash-in. This actually feels like the developers have put some love into this.

It’s still a movie tie-in so hey it really would like you to go and see this movie. They’ve actually got a game here that’s worth playing. I originally picked this game up thinking I would play it for you know, 5 or 10 minutes, see what it was like, and actually half an hour later I’m still having loads of great fun with it. It’s one of those weird sort of games that kind of just pulls you in especially because of the difficulty and how you kind of are overcoming that difficulty each time you die. It works surprisingly well..